What is that exciting and unique idea you have burning in your mind? Is it an invention? Is it a way you can help others? Whatever you are passionate about, you can make a difference in West Michigan. The vibrant business-sphere of West Michigan flows through every corner, creating exciting opportunities for growth, but how can we keep entrepreneurial spirit alive in West Michigan and sustain the rapid growth?

The truth is, it takes people like you to take the leap of faith. Everyone has that one “big idea” in their heads, but few actually manifest those ideas into reality. Deciding whether or not to dive in to entrepreneurship can stir a wide array of emotions and may be the reason many people do not take that step. Every business has a story of how they started, but Creative Studio Promotion’s history exemplifies the picture perfect “fairytale.”

The Story Behind Creative Studio Promotions

Ann Vidro, co-owner of Creative Studio Promotions (CSP), began her journey in the promotional goods industry as a minority owner of a screen printing company in West Michigan. Ann’s hard work ethic and devotion to the community has ignited her in the industry by exemplifying her love for people and her joyous personality.

Menda Wright, co-owner of Creative Studio Promotions (CSP), began her journey in the promotional goods industry in Columbus, Indiana where she worked for a promotional company. Menda’s dedication to her job grew the company she worked for exponentially. Menda’s entrepreneurial spirit and impassioned personality shines through in the amazing work she does.

It was love at first sight when a mutual friend of Ann and Menda suggested the two meet because of their dynamic personalities.

Taking her friend’s suggestion, Ann invited Menda to come in to her office to take a tour. Menda visited Ann’s office thinking she was going to do a “sales call” and try to sell Ann promotional products. Oddly enough, as Ann was giving Menda the tour, Menda started to recognize familiar items around the office. Little did Menda realize, Ann was in the same industry and was a competitor.
It was love at first sight when a mutual friend of Ann and Menda suggested the two meet because of their dynamic personalities.

After the tour, the two went out for coffee at a local coffee shop. It was obvious Ann and Menda were a perfect match as they spent hours talking, laughing, and of course drinking lots of coffee. After a substantial amount of caffeine, the two were actually cut off by the barista because they were so “hyped-up.” By the end of their time together, the two had become “best friends,” Ann offered Menda a job, and Menda willingly accepted.

After working together at the screen printing company for two years, the majority owner went through some challenging times and was forced to close the company. The majority owner then decided to move on and work for another company. After his move, he offered Ann and Menda jobs. Out of loyalty, Ann and Menda accepted the positions.

It wasn’t long before Ann and Menda realized their new positions were not going to be a good fit. Their morals did not match the company’s unethical business practices. Knowing they needed to get out, they extended the owner of the new company an offer to buy out the clients they had acquired. The owner rejected, and sent them a fax saying, “YOU’RE FIRED.”

That day (Thursday, June 15, 2012), Ann and Menda met with their business consultant who also happens to be Menda’s father. The two decided it was time to dive in to entrepreneurship. Joyfully Menda’s father said, “girls, it’s about time.”  Creative Studio Promotions was founded the same day Ann and Menda were fired, and by the next Tuesday, they were taking orders. The two consider the awful situation “the best thing that has ever happened because it forced [them] to jump off the cliff.” 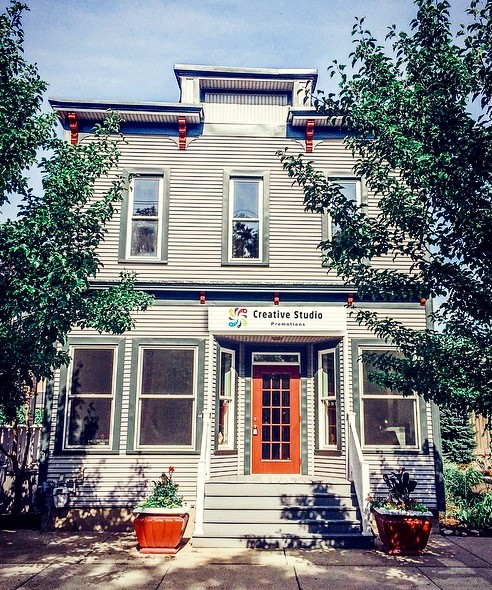 Now celebrating five years of business, CSP has gained several impressive accolades. To name a few, CSP has been listed in the INC. 5000 for two consecutive years (2016-2017), has become one of the leading suppliers within their Premier Group (2016), is a certified Women Owned Business, and has been listed in Michigan’s Top 50 companies to watch (2015).

Creative Studio Promotions is just one example of a success story in West Michigan that required taking a leap of faith. Look at the world around you and the many businesses you encounter every day. Perhaps you notice the company who manufactured the device you are reading this on, or maybe you notice the company who produced the food you eat. Whatever you notice, think of the story behind that brand: it required an entrepreneur, like you, to take the courageous leap of faith. What are you waiting for? It’s time to keep the entrepreneurial spirit here in West Michigan alive.

For over a century, we’ve been committed to seeing West Michigan grow, our neighbors prosper, and our employees enjoy a meaningful career. We believe this is our responsibility as the community bank in West Michigan: to honor those that trust us with their livelihood.